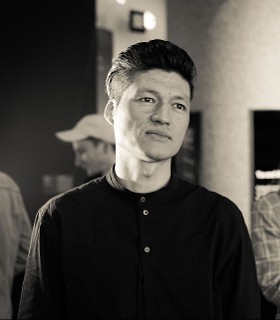 Alex is a multi award-winning Creative Director collaborating with some of the most progressive digital companies and brands in the world.

Working at the cutting-edge of XR, Alex is able to apply his multidisciplinary background in Graphic Design, Illustration and Character Animation to a diverse range of projects including, digital branding, websites, games, mobile Apps, installations and experiences.
Alex has led some of Nexus’ most pioneering interactive pieces, including the reimagination of the iconic series ‘Civilisations’ for the BBC’s first ever AR app as well as the BAFTA nominated collaboration with Google Arts and Culture and CERN to produce a mixed reality journey through the birth and evolution of the universe, as told by Tilda Swinton.

He was also pivotal in transforming the renowned AT&T stadium into the world’s first 5G enabled stadium, developing a number of hyper-accurate, never-seen-before AR experiences that can be viewed from any seat in the stadium in real-time in collaboration with Samsung.

Alex has received several industry accolades from the likes of Cannes Lions, The One Show, The Webbys and The Art Directors Club.