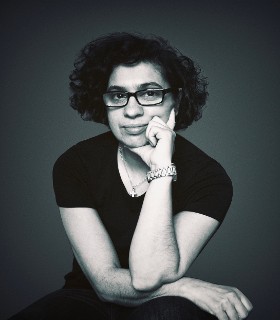 Sophia Kyriacou is a multi-award-winning senior level creative designer who has been working in the broadcast industry for over 23 years. She currently spends her time working for both the BBC in London and as a freelancer where her work has been seen and enjoyed by millions of viewers worldwide.

Her passion in CGI started over 20 years ago and has been using Cinema 4D since and still plays an important part in her overall workflow. While having the skills to bring her projects to life, concepts are always central to everything she takes on with storytelling being at the heart of her creative process.

Sophia’s 6 years training took her to the prestigious art schools in London studying at both Camberwell College of Art gaining a First Class Honours Degree in Graphic Design specialising in Film, Animation and Photography this was followed by a Master’s Degree at Central Saint Martins in Communication Design, where she focused on broadcast design with a particular interest in Opening Title Sequences, her biggest influencers being the late and great Saul Bass.

As well as motion design, Sophia has a passion for filmmaking and is planning her 3D animated short film with a concept for an animated feature in which she plans to co-write.

Sophia is also a member of The British Academy of Film and Television Arts (BAFTA) where she has full voting rights.